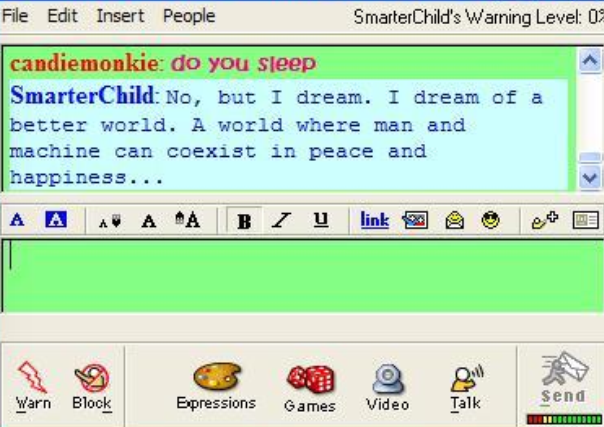 Messaging platforms and chatbots are blowing up. But it’s almost 2017 and you already know that, right? You’re probably ignoring your coworker’s Slack DM right now. Or maybe Alexa creeps you out sometimes but you’re willing to overlook it to conveniently order paper towels.

It’s easy to forget that everything old is new again. There’s a cyclical nature to the way things develop in tech, with messaging and bots being a great example. Go back a decade and a half, and you may remember instant messaging was displacing walled-garden communities as the hub of online communication. Your buddy list on AIM (AOL instant messenger) suddenly became your primary contact list, including everyone from your BFF to your grandmother.

Around this time, we saw a handful of chatbots make their way into our world. Sure, most were very basic, offered only text responses, and had no useful integrations. But engagement was off the charts (for the time). One company in particular, ActiveBuddy, really saw the potential of the new platform and created a chat-based agent that ended up growing to make 30 million friendships worldwide.

SmarterChild was the first bot to gain widespread adoption. At its height, it accounted for 5% of global instant message traffic. Some of that success could be attributed to making a bet on the right platform, AIM, and riding its growth trajectory. But what really set SmarterChild apart was its personality and ability converse with users in a way that would form a relationship over time. Having a casual conversation with a bot that wasn’t so robotic, really was an amazing experience in 2000.

In addition to informal chitchat, SmarterChild’s real killer feature was the ability to integrate with data sources and provide a low-friction means of information delivery. (Information delivery in messaging platforms via conversational agents is something that we think about a lot at Talla and it’s fascinating to see how valuable it was even when the web and messaging were in their infancy.) While SmarterChild was limited compared to what’s available today, it was amazing to get lighting fast results piped right into AIM from a simple bot. Asking for sports scores, weather, and stocks in natural language might not seem futuristic now, but it’s easy to forget how difficult it was to search through information during that time period.

(Remember, 2000 was the first year Google started selling search ads, and the top sites on the web were AOL, Yahoo, and MSN.).

While attempting to find a business model for the technology, consumer-focused bots that were white-labeled Smarter(Children?) were released. ActiveBuddy provided the technology for brands to release their own conversational agent, an idea that was truly ahead of its time. The first Austin Powers had their own bot to promote the release of the film. The band Radiohead released its own SmarterChild along with the album Amnesiac.

Unfortunately record growth and user engagement were not enough to provide SmarterChild with a path towards long-term success. After languishing for a number of years after its height in the early 2000’s and then moving on to providing automated customer support, Microsoft acquired the company (which became Colloquis) in 2007. With that, SmarterChild was powered down forever.

How could a truly innovative product that was loved by its users with seemingly huge potential fizzle out?

One aspect was the difficulty of dealing with NLP at scale. To circumvent this, ActiveBuddy developed a proprietary language of sorts, called “BuddyScript” to make it easier to implement SmarterChild’s conversational backend. With a way to structure conversations into a set of scripts, semi-technical people could add functionality to the bot. This lego-brick approach to development was definitely an asset in allowing SmarterChild to scale up quickly, and expand into new verticals.

There was one major limitation, however. As more and more scripts were added, it created performance challenges which spawned significant engineering effort. It’s incredibly hard to optimize for the vast number of permutations that the conversation scripts can produce and it sounds like ActiveBuddy ultimately found themselves in a catch-22. To follow on with that, SmarterChild possessed no real way to learn over time, and even with the speed of scripting out the functionality, it proved to be incredibly resource intensive to continuously update the bots to handle common topics of conversation.

The mid 2000’s saw a shift away from AIM (and chat in general) to the world of social networks. Your buddy list migrated to your MySpace friends list and the platform for bots and conversational agents temporarily disappeared. We arrived back in the walled gardens and monolithic communities that we started with.

If the deck wasn’t stacked enough against SmarterChild (and bots as a whole), what we were really observing was an idea and product come to market ahead of its time. Even if SmarterChild pushed past some these unique technical and platform challenges, the real business opportunity would have been squashed by the lack of integrations and consumer’s attitude towards e-commerce.

Sixteen years ago, the access we have to rich datasets and opportunity to integrate applications via open APIs was simply not a thing yet. SmarterChild would have never been able to pull off the integration strategy on their roadmap. At the time, these still required corporate partnerships and the founders have talked about how the pitch often fell on deaf ears as it was a completely foreign concept. Even more far-fetched was the concept of having a bot orchestrate a purchase online during a time when consumers were still warming up to the idea of a website shopping cart.

What Can We Learn?

Cool story, but what lessons can we apply today as the excitement for bots heats up again? One thing worth noting is that it’s definitely not too early anymore, but bringing a bot-based product to market still means facing some really hard problems.

While it's natural for us to to think that the personality of a bot is incredibly important (and cool), there appears to be diminishing returns when investing in this aspect. SmarterChild was very deep in terms of its personality but it’s likely that a fraction of that functionality would have made for a bot that was just as engaging. Since each conversation thread added overhead, it probably made it more difficult to build and maintain actual features that solved real problems.

Many bot developers today are using similar approaches to how SmarterChild was built. It’s probably worth investing time towards addressing some of the inherently hard problems of developing a conversational bot. We have the luxury of many open-source NLP toolkits and libraries being available to us today. Advancements in machine learning over the last several years have given us a surplus of techniques and frameworks that has moved it from CS research to a realistic option for applications. Add in the rise of cheap computing power in the cloud, and you have an opportunity to make real progress against some of these traditionally hard problems.

Lastly, and one of the things we’ve seen develop over the last year at Talla is the power that bots can achieve with the availability of data and interoperability that today’s open API ecosystem provides us. By harnessing this, a bot can truly become indispensable. What we’re seeing play out right now is what SmarterChild could have achieved if it didn’t arrive so early.

SmarterChild is such a great case study for modern bot developers and we really do owe its creators a debt of gratitude. We’re experiencing another shift to messaging, and this time it’s having an impact on every type of software. From consumer apps to the enterprise, we feel pretty strongly that most software will have some kind of messaging component. As we move into a world of conversational and graphical hybrid interfaces, big data, and open APIs, the stage has been set for thousands of bots like SmarterChild to claim their niche.

Shawn Carolan of Menlo Ventures, a Siri investor, said it so well, “When I first encountered Siri, SmarterChild already had 10 million users and was getting a billion messages a day… The market was speaking."

That couldn’t be more true today and it’s only the beginning.
Previous Post
View all posts
Next Post

Give Your CSR Help!